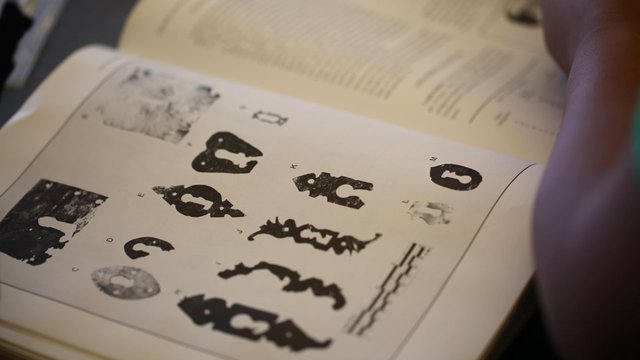 Archaeologists use the tangible remnants of the past—material culture—such as pottery, rocks, and buttons from the days of yore, and transform these finds into information the people who made and used them. An artifact is anything that has been made, altered, or used by humans. So a rock is just a rock, but a rock that has been used as a tool becomes an artifact.

Some artifacts are easy to spot—such as broken dishes, bottles, or projectile points—while objects like stone tools can be a little trickier to identify. Years of training go into deciphering whether that very same rock was, in fact, a rock or a 5,000-year-old version of a ball-peen hammer.

A feature is another important clue for archaeologists. It is essentially an artifact that cannot be taken back to the lab. Features are fixed in place, like rock walls or foundations, and can be very fragile, like a charcoal stain from a cooking hearth. Features are very exciting to archaeologists because, unlike an artifact that can be carried, eroded or transported by a busy gopher, a feature sits right where it was put by those who made it (aka “in situ”).

Another type of find is an “ecofact.” While humans did not create them, ecofacts provide relevant information about what humans were eating or what the environment was like in the past. Ecofacts can be anything from acorns, to pollen, to wild animal bones. Understanding what the world was like around humans can sometimes help to explain the archaeology they left behind.

When archaeologists put all of these clues together, a picture can emerge about the people who created the archaeological site, and what their lives may have been like.

Why the study of plants tells us so much about people