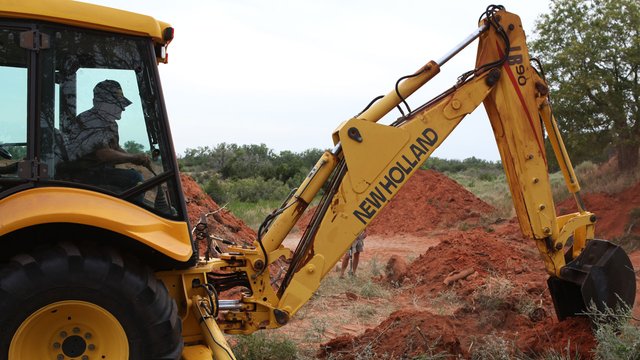 With only three days to excavate, and some big questions to answer, Time Team America got a jumpstart on the project by sending Remote Sensing and Visualization Specialist, Dr. Meg Watters, in early to gather as much data as possible before the trowels hit the dirt.  Meg and Dr. Lee Bement first flew over Badger Hole with a team from West Virginia University National Resource Analysis Center (NRAC) in order to collect airborne LiDAR data, which would allow them to make high resolution 3D maps of the area. These maps then showed locations with potentially intact arroyos (like those found at the Cooper, Jakes Bluff, and the Badger Hole sites) that could help the Oklahoma Archeological Survey continue their research along the Beaver River corridor.

Faced with the task of finding the remnants of the ancient landscape associated with the site,

Meg recruited Dr. Bereket Derrie from Round Rock Geophysics to help the Team conduct the seismic tomography and electrical resistivity imaging (ERI) surveys needed to penetrate deep into the earth of the Badger Hole arroyo. The ERI data provided the team with the potential depth and location of the targeted knickpoint.  They then used a Giddings probeto take cores, or vertical samples of the dirt, in the arroyo across the site. When things looked promising, we called in “Dozer Dan” and his backhoe to help move some earth. Backhoe excavation was also done at the eroded edge of the arroyo, providing Lee and his crew a valuable glimpse at the extent of past erosional activities within the Badger Hole arroyo and how they have affected the archaeological deposits.

Meg’s team continued to do additional geophysical surveys and soil cores (with a bucket augur) at nearby Jake Bluff to determine the most effective methodology for large scale landscape surveys, which will help the Oklahoma Archeological Survey better understand the sub-surface structure of the in-filled ancient arroyos. This will provide important data for future archaeological investigations on the fascinating complex of ancient bone beds along the Beaver River.

Excavations at the Badger Hole site also revealed important clues about how Paleoindian hunters captured and processed the massive bison using both the landscape and a sophisticated understanding of herd behavior. Along with the help of University of Oklahoma field school students, Time Team America excavated deep into the ancient bison bone bed. Painstaking excavation revealed the layout of the bison skeletons and provided important information about how they were captured and killed.  Using Isotope analysis on the bones and mass spectroscopy on the teeth provided important information about the age, range, and habitat of the bison. Stone tools were also found, and these artifacts reflect the weapons used to bring down the massive animals and the tools needed to butcher the meat. Stone tools can be very sharp, but they dull easily, and the presence of tiny microflakes in the bone bed shows that tools were being sharpened on site during the processing of the meat. The raw materials used to make tools can also be sourced with XRF, which indicated that some of the ancient hunters traveled long distances to hunt at this location. 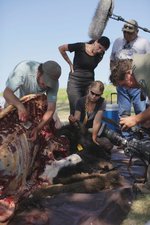 In order to better interpret the activities at the site, Time Team America did a little experimental archaeology, which was way cool!! We were able to get a buffalo from our friends at the Cheyenne Arapaho Tribe, and butcher the animal using traditional tools and methods. Armed with stone tools, and guided by Lee, we saw firsthand the massive group effort needed to quickly and efficiently butcher a bison (and remember, modern bison are roughly 20% smaller than their ancient relatives!). The stone tools were sharp (and dangerous to quickly moving fingers!) and had to be constantly replaced as the edges dulled. We also recognized the knicks and scrapes our tools made in the fresh bone, and could directly compare them to the marks on the 10,000 year-old bones we were excavating.

While the artifact assemblage might be simple, it provided complex data about Paleoindian life.  Using a variety of scientific methods to examine the bison bone bed artifacts and the surrounding landscape, we can step back in time and see why the ancient hunters chose this spot, where they came from (some groups traveled over 100 miles!), and how a small group of humans working together were able to take down a herd of massive bison. What’s more, the bones of Badger Hole tell us about the life and range of Bison Antiquitus, and provide a valuable glimpse into larger environmental changes happening on the Great Plains over 10,000 years ago.

With a better understanding of the Paleo-environmental history of the Beaver River corridor, scientists can recognize the natural and cultural processes that took place long ago, and how they helped shape the modern landscape. This is particularly important in this area where we have three large Paleoindian bison kill sites reflecting at least five kill episodes within a less than half a mile section of the eroding river terrace. While we expect that many other sites have already been lost by the same erosional processes that had attracted the hunters to this region in the first place, the geophysical and LiDAR surveys, and the evidence obtained through excavation, help us better interpret the complex structure of the site, and how the Paleoindian people were able to use this unique landscape as a weapon, giving them the advantage needed to successfully hunt bison over 10,000 years ago, resulting in their survival.

Too see some of the highlights of what we found at the site, check out the Fragments From Our Past slideshow.