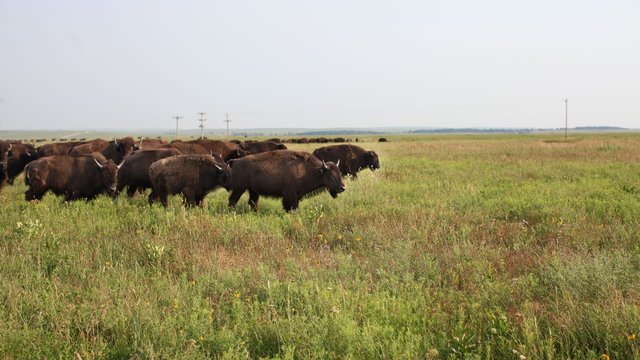 A remote arroyo on Oklahoma’s Beaver River provided Time Team America a unique opportunity to explore what people were doing more than 10,000 years ago. We were invited to the site by the site direction, Dr. Lee Bement from the University of Oklahoma.  He has been working along the Beaver River since the early 1990s, when the Oklahoma Archeological Survey discovered the Cooper Site: a 10,000-plus year old bison kill site reflecting three ancient hunting events and the site of the amazing find, the painted

Cooper Skull (the oldest painted object in North America). A few years later Lee’s team discovered the Jake Bluff bison kill site, a Clovis-era site, which pre-dates the Folsom-era sites at Cooper and Badger Hole. Lee and his team excavated at Jake Bluff for nearly a decade, continually pushing back the known dates for large-scale bison hunting. The Badger Hole site was discovered in 2010 when bison bones were spotted eroding from an actual badger hole along the Beaver River.  Excavations in 2011 were promising, and in 2012, Time Team America joined Lee and his crew in an effort to determine if the bones of Badger Hole might reflect the largest archaeological bison kill event in North America, and what these ancient bones could tell us about life on the Great Plains ten thousand years ago.

Lee asked Time Team America to help establish the extent of the deeply buried bison bone bed and to specifically help answer the following questions about the site:

To find out what happened when the Team descended on this Oklahoma bison kill site, read “What We Did & What We Learned."