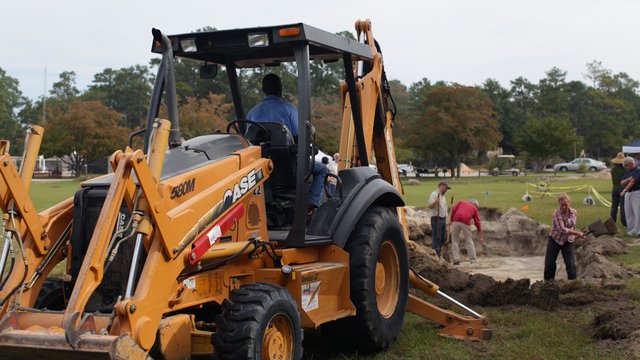 The first step at The Lost Civil War Prison site was to conduct a geophysical survey. However, Dr. Meg Watters and her team were faced with the daunting task of surveying the largest site tackled by Time Team America thus far. So, they called in for reinforcements! With the extra help, the remote sensing team was able to pepper the park with a combination of GPR, magnetic gradient, conductivity, and magnetic susceptibility survey methods to help guide excavation. This comprehensive survey resulted in a massive amount of data that kept Time Team America excavators scrambling. While the

data provided tantalizing clues about the configuration of the prisoner shebangs within the camp, Meg’s biggest priority was locating a corner of the stockade wall, which would allow researchers to firmly tie the site to the detailed historic maps of the area.

With such ambitious goals given the time constraints and the vast site parameters, the Team decided to divide and conquer by spreading our resources across the site in order to investigate specific areas of interest.  Based on previous work done by Georgia Southern University, excavations were placed within the area believed to have housed the Union POW's. The goal was to look for the remnants of the rustic shelters, called shebangs. A detailed metal detection survey was also conducted in this area, and each find was carefully recorded in order to look for patterns or concentrations of artifacts that could reflect historical activity. There were also groups that went to work outside of the prison walls in an effort to locate the ammunition magazine, the Confederate guard, and officer camps.

Buttons, buckles, and a grommet from an oil cloth found in the prison camp area provided a glimpse into what the prisoners wore, as well as documenting the limited supplies they had access to. But perhaps the most personal artifact found by the Team was a folded picture frame that a soldier would have kept tucked in his pocket to remind him of home. In order to get a better sense of the experience of the soldiers, Allan Maca decided to do some experiential archaeology so with the help of Jeff Brown, he built a traditional shebang, and then spent one sleepless night in it. Allan's experience shows us how unhealthy, uncomfortable, and exhausting the conditions were, even for a healthy man, and alluded to how much worse it would have been for someone ill, injured, and/or for those who spent a long period of captivity.

Other artifacts reflected the prisoner’s resiliency and ingenuity.  Historical documents reported that bricks, which were used to build the camp's central oven, were often stolen by the POW's. The intact remnants of a brick hearth found inside a shebang during excavation suggests that prisoners found creative ways to stay warm and potentially survive during one of the coldest autumns on record.

While excavations did not reveal the magazine, a cluster of artifacts found by a metal detection survey provided promising evidence of the Confederate occupation at the camp. Among these artifacts, a button, powder flask, and part of a spyglass are good clues that Georgia Southern University researchers will likely follow up on.

The hunt for the stockade wall led to the discovery of not one, but two of the walls, which led us to find a corner of the prison camp. In addition to the buried remnants of the wall, timbers were found in the creek in the area where the stockade would have crossed the water. At the very end of Day 3, a third wall was found, providing the archaeologists the exact dimensions of the historic fort.

The discovery of the stockade walls will not only help the researchers clarify the exact layout and archaeological resources of Camp Lawton, but it also serves as a powerful symbol of the site’s intended purpose. At a glance, the archaeology across the site might not seem distinctive, but when placed in association with the stockade wall, the artifacts take on new meaning.  On one side of the wall artifacts belonged to the imprisoned, and on the other, to the free. This juxtaposition can be seen most clearly with the picture frame lost by a Union soldier, and the spyglass found on the hill above the camp.

The artifact assemblage found within the prison camp area reflected the limited goods that the soldiers had access to. This made the relatively mundane artifacts, like the rivet from an oil cloth even more important as they would have represented a small amount of comfort for a soldier sleeping on the hard, cold ground. As always for Time Team America, with such a short time to investigate Camp Lawton, we could barely scratch the surface of the 42 acre archaeological site.  Lucky for us, Georgia Southern University has years to investigate. Armed with the information from our excavation and the reams of data from our remote sensing team, researchers will be able to shed new light on this pivotal moment in the history of the American Civil War for all to learn from, especially the surviving families.

To view some of the finds described above, check out the Fragments From Our Past slideshow.