In order to make the most out of our three days at the Dillard Site, Dr. Meg Watters and her geophysics team conducted a number of surveys in an attempt to identify features associated with the ancient village. Previous excavations identified at least five pithouses south of the Great Kiva, so Time Team America focused our efforts to the north.

Meg used magnetic gradient survey, conductivity, magnetic susceptibility, and resistance survey. Remarkably, all of the geophysical surveys mapped buried archaeological features. The magnetic gradient survey was the most effective method and identified an additional eight or nine potential pithouses. Over the next three days these anomalies were ground-truthed through a combination of excavation, soil coring, and augering.

While we did not excavate inside the Great Kiva, the mysterious feature was central to our research at the site. The kiva likely served as a community space, for social and religious purposes, and would have been used and maintained by the people living around it. Thanks to the geophys surveys, we were able to see that the population density on the north side of the kiva did mirror the south, and excavation within some of these building features provided intriguing clues about the community.

Artifacts found within the pithouses and nearby middens showed that ancient residents of the Dillard Site were using a suite of items associated with early farming in the area. The ceramic seed storage jars, manos and metates needed for grinding corn, and undecorated cooking pots all reflect an agricultural community. Botanical analysis found evidence of corn at the site, a plant that is dependent on humans for propagation. The transition from baskets to ceramic pots represents more than just the adoption of a single new technology, but is part of a larger paradigm shift in terms of technological advances, which also includes the introduction of the bow and arrow.

Two of the pithouses we excavated showed evidence of high heat. This is consistent with the intentional burning sometimes done with a ritual abandonment of a building. We discovered that some structures had been burned and others had not, a fact that could reflect multiple occupations of the site over time. A ground stone mortar, used for grinding medicines, pigments, or other ritual materials, was found in one of the burned pithouses. Further analysis on this exciting artifact could help researchers better understand the types of activities taking place near the Great Kiva.

Time Team America began the investigation at the Dillard Site with questions about the site’s role in the Neolithic revolution taking place during the Basketmaker III cultural period. Over three days, a picture of the early village began to take shape. Geophysical data, archaeological evidence, and a robust artifact assemblage indicates that the Dillard Site represents a settled, organized form of community life, and could have been one of the first villages in this region. At the time of our excavations, 14 pithouses were confirmed, along with storage and work structures, a fence, middens, and other features—suggesting that up to 70 people may have lived at the site.

The artifacts reflect the agricultural activities happening at the site. Residents were growing corn, beans, and squash; cooking in ceramic vessels; storing food in decorated pots; and adding a variety of game animals to their diet with the aid of the bow and arrow. Armed with the data from our 2012 excavations and Meg’s detailed geophysical maps, Shanna Diedrich and the Crow Canyon team will continue to explore and expand our understanding of the people living and working at the Dillard site, and the role they played in the revolution taking place in the southwest 1400 years ago.

Check out some of the finds in our Fragments From Our Past slideshow. 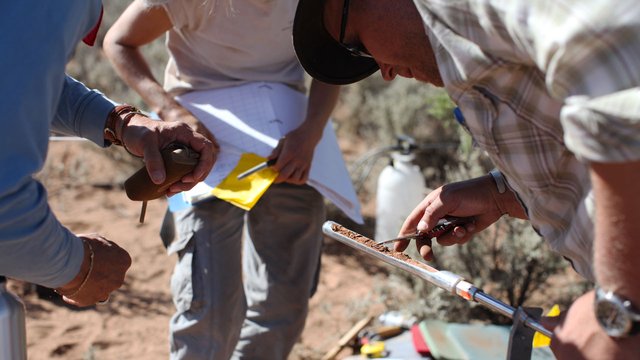