The original estate from Josiah Henson’s time on Riley Plantation was much larger than the current county park.  Therefore, Dr. Meg Watters geophysical survey was not limited to the park’s grounds, thanks to the curious and kind neighbors, we were able to extend into their lawns adjacent to the park.  Meg and the geophys team conducted magnetic gradient, conductivity,  resistance, and ground penetrating radar (GPR) in order to try to identify structures or landscape features related to the period 1800-1830 when Josiah Henson lived on the Riley Plantation.  This led to the discovery of a cluster of anomalies in the location of some buildings seen on an aerial map of the property.  Meg’s survey results highlighted a cluster of anomalies that matched with the location of buildings seen on historic aerial photos. When Time Team America ground-truthed some of the geophys findings, the remnants of an early building was found that could have been the plantation's Blacksmith shop. While the majority of the artifacts dated to later use of the building, hand wrought nails suggested that the structure itself could date to early plantation days. 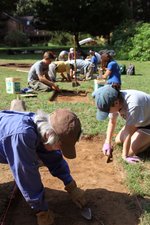 Within the park grounds, we placed a 2 ½ by 40 foot trench next to previous excavations done in an area where they believed buildings used by the enslaved residents of the plantation had been.  Geophys data supported the theory that something interesting was under this small section of lawn. Although the evidence was subtle, artifacts and archaeological features did suggest that there could have been a building in the area.  The rustic structures used by plantation slaves would have been minimal, therefore leaving only the faintest of archaeological traces.  Continuing work in this area will help park archaeologists better understand that faint assemblage.

Another team, including Dr. Allan Maca and Jeff Brown, focused on an area behind a modern shed that was used as a garbage dump.  If the location had always served as a dumping area, theoretically there could be early nineteenth century refuse in deeper in the ground.  A rich deposit of refuse dating back generations was found, and will help archaeologists learn about the changing use of the plantation over time.

The biggest clue was the log kitchen, which dendrochronology suggested was built in the 1850s.  Heather and her team had long been curious whether this building was constructed on top of an earlier kitchen, as it was a prime location for such a high use activity area. 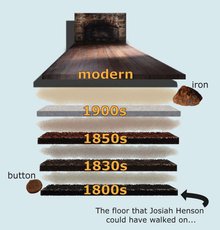 In order to test this theory, we set to work pulling floorboards and took a peek underneath.  The dusty, cobwebby excavation under the floor did not disappoint.  A total of five historic floors were discovered, the deepest of which could very well have been used during Josiah Henson’s life on the plantation.   Artifacts found under the various floor layers reflected daily life at the Riley Plantation through a variety of personal items such as tobacco pipes and a toy marble, and more utilitarian items like a flat iron and a piece of early nineteenth century tableware called flow blue.

In addition to the archaeology, we wanted to get a taste of what it was like on the plantation nearly two hundred years ago. Food historian Michael Twitty helped us do just that.  He cooked a meal using ingredients and methods that would have been familiar to Josiah Henson and his family.  The Jubilee Voices sang tradition songs used by the enslaved to communicate to each other during the underground railroad. These experiences reinforced that amidst the brutality and struggle of plantation life, there were nonetheless moments of joy, incredible strength, and optimism.

Through a combination of geophysical survey, excavation, and even a little demolition, we were able to help researchers map the archaeological resources within the park grounds and neighboring properties that relate to the early nineteenth century landscape.

Most intriguing, a small hole excavated under the floorboards of the log kitchen suggests that this building was indeed constructed over the earlier kitchen used during Henson’s time there.  While the small section of compacted earth we found might not look like much, it not only shows that there is intact archaeology under the building, but that this preserved floor could have been well trodden by Henson himself. Henson’s writes in his autobiography a moving account of being forced to sleep on the kitchen’s dirt floor.

“At night I was sent to such quarters as I had been accustomed to long enough, the cabin used for a kitchen, with its earth floor, its filth, and its numerous occupants.”

side Just months after Time Team America left, The Josiah Henson Special Park was awarded a grant from the Montgomery County Planning Board, with potentially additional funds coming from the Montgomery Parks Foundation that will not only help restore and protect this important piece of American history, but will allow them to share it with the public.

Check out the slideshow of what we unearthed. 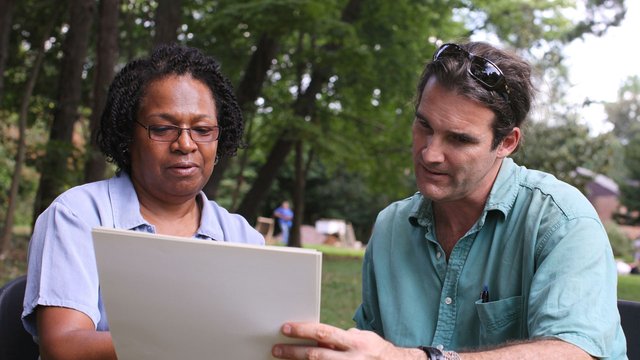