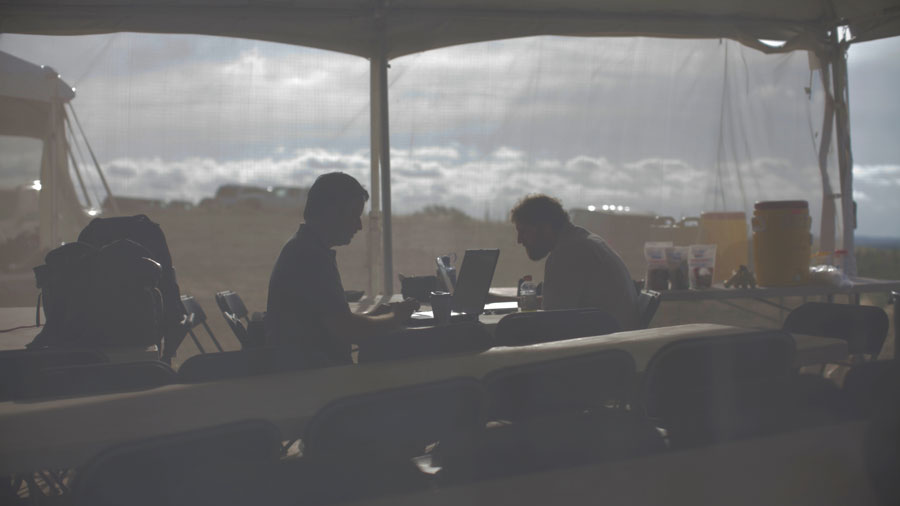 On site with Bryan Haley »

I specialize in applying geophysical techniques, aerial remote sensing, total station and GPS surveying, and geographic information systems (GIS) to archaeological research. This focus has lead me to work in such diverse settings as Maya centers in Belize, Roman villas, Scottish castles, and Peruvian hill forts, as well as joining Time Team America. I also specialize in the archaeology of the southeastern US, particularly Native American sites dating to just before and just after European contact. What I like most about my job is the variety of tasks that I am regularly confronted with, such as processing and interpreting the geophysical data I collect, excavation, analyzing artifacts, working with students, and learning new cutting-edge technology. I received a Bachelor of Sciences in Anthropology and a Minor in Computer Science from the University of Kentucky in 1999 and a Master of Arts in Anthropology from the University of Mississippi in 2002. I am now pursuing a PhD in Anthropology at Tulane University, where I focus on mound sites located along the Mississippi River. When I am not doing archaeology, I enjoy sailing on Lake Pontchartrain and living the exciting life that New Orleans offers.

At a mound center in northwestern Mississippi, I mapped a cluster of large Mississippian houses, probably occupied by high status individuals. This was after years of research at that site and the presumption that we already understood its layout. But in a few hours we opened a new chapter on how the site was organized.

The magnetometer, which allows me to map important prehistoric features such houses, mounds, and pits, as well as historic targets such as walls and even artifact scatters. In many cases, it would take years to do with traditional methods what we can accomplish in days with a magnetometer.

I’ve been lucky enough to work on many dreams sites, including a Peruvian hill fort, a Scottish castle, a Roman villa, and several Classic Maya centers. My favorite site, however, is my dissertation site (a Mississippian mound center called Hollywood) because there is so much yet to learn about it and geophysics works really well there.

Since I was a little kid, I wanted to be a computer programmer and that was my first major in college. But while taking a trip to Asia and seeing another culture and its long past, I realized I wanted to be an archaeologist. What was amazing it that I was able to blend archaeology with my interest in computers and technology.

The challenge. The geophysics team has only a day or two to make sense of a site before the dig team begins. There is pressure and long days and nights, but that brings out the best in me.

What does Time Team America mean to you?

Time Team America is a chance to give the public a glimpse of what archaeologists actually do. That includes utilizing the array of technology that the geophysics team uses – not just the shovels and screens that most people think of (although those are still important).  It is also a chance to show that important and fascinating archaeology is all around us and from all different time periods – not just involving Egyptian pyramids in far away lands.

American archaeologists from the early half of the 20th century (Kidder, Phillips, Ford). They had to figure out what archaeological questions were worth asking and what methods could be used to answer them. They didn’t have the benefit of the technology that we have today.

I’ve returned to school to pursue my PhD. So during the semester, I go to lectures, work in the lab, and read a lot. Living in the great city of New Orleans, there are a lot of good daily distractions too. I travel by streetcar and eat oysters out on balconies pretty routinely. The summer is when the field work happens and when I spend months on the road. Mostly this is in the Mississippi Delta doing my own research, but occasionally I get to work with colleagues in places such as Peru, Belize, or Scotland.

We do get to dress up for conferences, lectures, and classes. Most of us aren’t in the field every day.

After a long day at work you…?

Find a bar, drink a cold beer, and try and make since of the data that was collected that day. The fieldwork is only the beginning. Analyzing and intepreting the data takes just as long and is equally as important.

Your ideal dig would include…?

We use a bunch of tools. But for me, the most important ingredients would be a machete, a sharp trowel, a flat shovel, a screen, metric tape measures, a camera, graph paper and notebook, a total station, a fast laptop, a magnetometer, a four wheel drive, and a hammock. You can figure out about anything with that kit.

What does it take to do what you do? I mean, it’s a seriously dirty hot mess out there with the bugs, critters, traveling to remote places, and now cameras!?!

A sense of adventure. I get bored easy, so I constantly need something new to challenge me, which archaeology provides. I’d much rather deal with the heat and bugs than sit behind a desk every day.

You have tattoos, too?

Three. Two show Native American iconography and own is a tribute to my home state of Kentucky.

All of the above. There’s a little bit of Adventurer too. Indiana Jones is fictional, but I do like to make discoveries and tell people interesting stories.