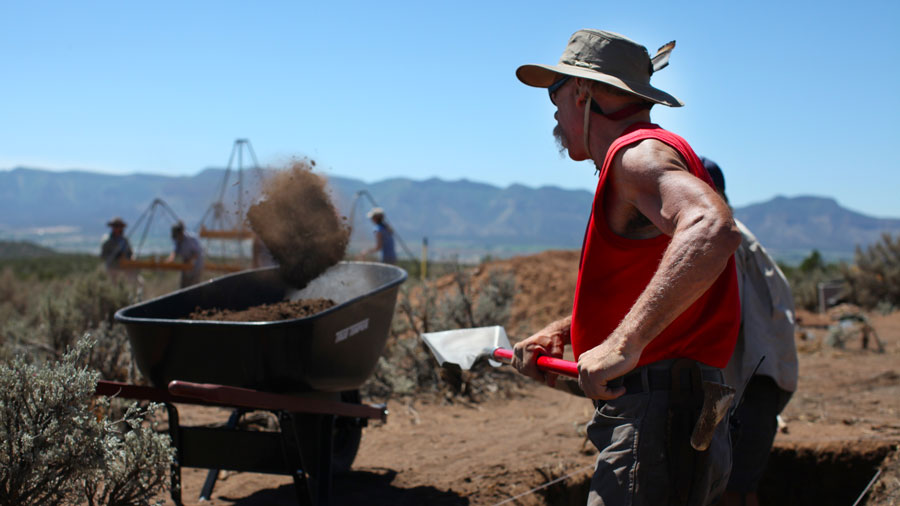 On site with Jeff Brown »

Born in the City of Brotherly Love and raised in Pittsburgh, PA, Jeff Brown now resides as a tribal member on the Pamunkey Indian Reservation in King William, VA. With treaties reaching back to 1646 and 1677, the Pamunkey is the oldest reservation in America. Jeff, a tribal councilman, entered into archaeology to help protect his tribe against a reservoir projected to be built on old tribal land. He was "bit hard by the archaeology bug," and has since assisted the College of William and Mary with three field schools at Werowacomoco, the native stronghold where Captain John Smith was brought as a captive to Chief Powhatan. Jeff has also worked CRM with Geo-Marine, CRI, and Data Investigations. He is a proficient shoveler, troweler and screener, never tiring of finding ancient artifacts. When not on an archaeological dig, Jeff spends his time fishing drift nets down the Pamunkey River bends. He's not one to be bored with pulling in crab pots, enjoying a good pub, or taking in beautiful sunsets on the Pamunkey River.

Werowocomoco, VA (Powhatan’s seat of power) and the Lost Colony, NC. Both are Algonquin sites.

Being at Werowocomoco as an Indian Advisory Committee member and realizing how important archaeology is to interpreting our history.

Meeting and working with really great people in front of and behind the camera.

What does Time Team America mean to you?

A chance to share my passion for archaeology with millions of people.

What do you hope is the take away for viewers of Time Team America?

That they get to see real archaeology brought into their homes.

Mom, in life and now in spirit.

What’s an important lesson you’ve learned from investigating the past?

That our interpretations of history are always changing with our finds.

If you could be anyone from the past, who would it be and why?

Paramount Chief Powhatan. Bring peace and prosperity for all peoples in VA.

I’m the same person at work and at home, so, no. I don’t dress up on weekends.