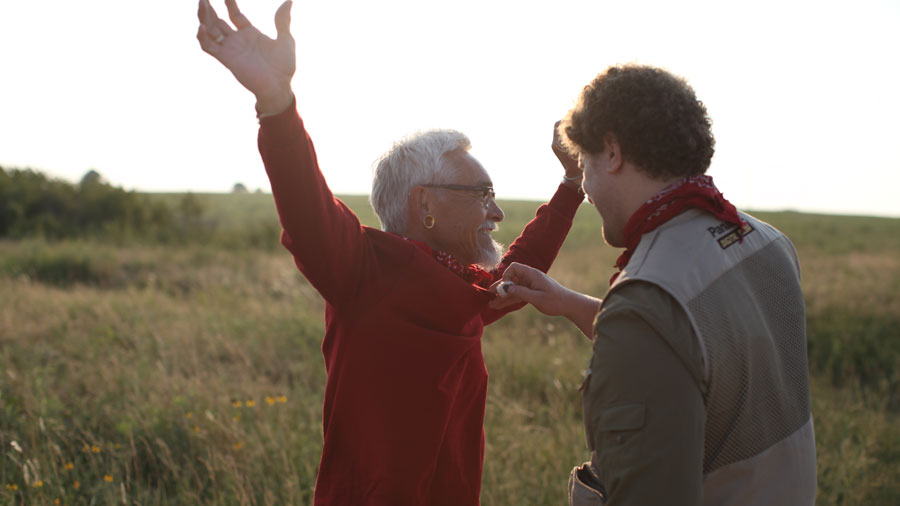 On site with Joe Watkins »

Dr. Joe Watkins is a Choctaw Indian and one of only a small group of American Indians with a Ph.D. in Archaeology. As a young boy growing up in southeastern Oklahoma, Joe found a two thousand year old stone projectile point while walking in the woods. Joe's grandmother, who spoke only native Choctaw, told him it "belonged to the people before our people." Immediately enthralled by that discovery, Joe found his passion. Since then, Joe has logged more than forty years of archaeological experience. He also serves as a mediator between various academic disciplines and members of Indigenous groups worldwide. Joe's current study interests include the ethical practice of anthropology and the study of anthropology's relationships with descendant communities and Aboriginal populations. He has published two books aimed toward creating an awareness of Native American issues among high school students. Joe also has a keen interest in experimental archaeology, which uses replica tools to discover how people of the past went about the activities of daily life.

My best find as an archaeologist is not something that others might think to be “remarkable”. I remember finding a projectile point on my family homestead in southeastern Oklahoma when I was about 10 years old. My grandmother let it be known that the point belonged to others who live in Oklahoma before the Choctaw did, and that she felt it was important that their “unwritten history” not be lost. The projectile point itself was about 4,000 to 6,000 years old, but it was that fact that it contributed to our understanding of past cultures that gave it the meaning to me.

See answer number 1 above. While I initially wanted to be a paleontologist and dig up dinosaur egg nests in Mongolia with Roy Chapman Andrews, once I learned about archaeology and the questions and answers it could provide about the human past, I was hooked. I found a projectile point at age 10 that made an impression on me, but it wasn’t until 17 that I did my first archaeological survey. I’ve been “doing archaeology” since.

My favorite thing about working on Time Team is the level of energy that surrounds everyone associated with the production. The archaeologists, camera and production crews, and especially the site crews we work with, all bring a level of energy to what they do that makes those of us who are a part of it all just as excited. Our minds race and our pulses quicken when we get on site, and then everyone makes it happen!

What do you hope is the take away for viewers of Time Team America?

What’s an important lesson you’ve learned from investigating the past?

One of the most important lessons I’ve learned from investigating the past is that all humans share the same sorts of issues within their lives – where to live, what to eat, how to provide for family, how to care for the old and the young. People in the past didn’t have the same level of sophistication in terms of technology, but they all had to survive and deal with social issues, climate change, and so forth. The great thing about archaeology is that it can offer a time depth that can help give us answers about how to handle situations that face today’s world.

In high-school, you were voted most likely to….?

In high school, I wasn’t considered important enough to be noticed, I don’t believe. I was quiet, shy, and studious. I dated a lot and had friends that crossed the gamut of all social statuses, but I was mostly in the background. As you can gather from my on-air personality, I am a wall flower in disguise!

If you could be anyone from the past, who would it be and why?

If I could be anyone from the past, I think I’d like to be Jacques Boucher de Perthes – the person who first related flaked stone hand axes to humans and to the depth of time for human occupation in the world. Not a big name anywhere except archaeology, but his contributions are the ones we have built on for the last 175 years.

What was the most challenging obstacle that you overcame to become an archaeologist?

Most days in my life are spent in front of the computer. As Director of the Native American Studies Program at the University of Oklahoma I deal with a great deal of administrative issues – email haunts me! I read large numbers of class papers, Masters theses and PhD dissertations and, rather than print out each draft, I try to read them on-line. By the time I get to bed at night, I’ve probably spent 10 to 12 hours in front of the computer.

Because of my job at the Univesity, I dress mostly in slacks and button-down collars throughout the week. On week-ends you’ll usually find me in denims and t-shirts – either short sleeved or long-sleeved. I love the casual feel of it all, but realize we all wear particular classes of uniforms throughout our lives.

After a long day at work you…?

Try to unwind through escaping in crossword puzzles, playing computer solitaire, or watching mindless mysteries on television. I don’t read as much as I once did, and don’t make time to write either. When I do make time, I like to recreate materials used by earlier inhabitants on the continent – stone tools, cordage, beadwork, featherwork, and so forth. Doing that work truly ties me into the minds of those who created such items that we find (and don’t find) in archaeological sites.

What does it take to do what you do?  I mean, it’s a seriously dirty hot mess out there with the bugs, critters, traveling to remote places, and now cameras!?!

I do believe it takes a different sort of person to do what we do. You have to be rather impervious to all sorts of distractions, including bugs, snakes, long trips in hot dusty cars – but I wouldn’t trade much of it for anything else. I believe the thrill of finding out things about people who lived thousands of years ago – being the first person to handle a tool in thousands of years – gives a connection not too many people in the world can say they’ve experienced.

You have tattoos, too?

I have two tattoos – one on each wrist – that remind me of the grand scheme of culture that has existed in North America. The tattoo on my left wrist depicts a hawk with a lightning bolt on its eye. It is a copy of an artifact produced by the Hopewell Culture of the Ohio basin that was made on sheet copper. The one on my right wrist is a copy of a character that was found on shell carvings at the Spiro Mounds of southeastern Oklahoma. The hand-and-eye motif represents a Caddo Indian story – the hand represents the doorway to the river of the souls, and the eye represents that doorway’s location as the center star of Orion’s belt.

I am definitely all of the above in various portions of my life, of course. I consider myself a scientist, but I am also a very strong humanist. I believe that the most important contributions science (and scientists) can make has to relate to humans, otherwise we are doing things only to selfishly make our own selves happy.